“The dance is poem of which each movement is a word.”

Afghanistan was one of the first stops for Indo-Aryan tribes on their way to India and Persia. It is the area where the original Vedic and Avestan hymns were developed and from whence most of the great Persian poets hail including Molana Jalalladin Rumi. Afghanistan was on the path of Buddhism which found it’s way to Central Asia and China with Bamyan as a major Buddhist center with it’s huge statue of the Buddha carved in a cave which was recently destroyed because is was considered a pagan a graven image.

Afghanistan is a land of three main ethnic groups: the Pashtuns who inhabit the southern half, the Tajiks who are said to be the former inhabitants of the area and the Asiatic people of the north (mainly Uzbek), and Turkoman in the northwest. The southwest is inhabited by a minority group known as Baluchi who spread over from Iran and into Pakistan. The western border area of Afghanistan, Herat province, is inhabited by people similar to those living on the other side of the border in Iranian Khorasan. Music in Afghanistan seems to be divisible along these ethnic lines: Pashtun, Herati, Uzbek and the less predominant Baluchi and Turkoman styles. Logar province, south of Kabul is known for it’s musicians and dancers and has a special style of it’s own. In recent decades, Indian classical music has influenced the Kabul area.

Afghan dance styles can be classified according to ethnic and geographic divisions. The Pashtuns of the south have wild and virile dances; the Uzbeks of the north represent Turkic dance forms similar to those of other Turkic peoples yet different than the court dance tradition which has developed into the styles of Uzbekistan. The Heratis seem to have developed their own form possibly representative of past eras when Herat was the cultural center of the Islamic world and influential because of philosopher sufi saint Khwaja Abdulla Ansari. Traditionally, it was a disgrace for a woman to dance in public except at family gatherings where everyone danced for fun, privately or in the company of other women. So, women who entered the performing arts were often considered of ill repute. However, the courts of former rulers, especially Moghul emperors, were resplendent with ladies who were masters of refined graceful dance forms similar to Indian nautch, which reportedly came from Persia.Women’s dance of more recent decades in Kabul reflects influence from India.  The traditional style of Logar, an area south of Kabul famous for it’s skilled performers, is characterized by surprise stops in the music during which the dancer(s) must freeze, holding a pose until the music suddenly jumps into action again. Usually Kabuli, Logari and Pashtu dance is done to a 7/8 rhythm pattern known as tal-e Moghuli counted 3 + 4 with accents on the 1st and 4th beat and pickup accents on the 3rd, 6th and 7th. The Pashtu word gada collectively refers to various types of folk dances which are performed on festive occasions, national celebrations such as jeshn and also religious celebrations. The most popular of these folk dances are: atan, ashla and natsa. The atan is performed by groups of men or women to the accompaniment of the large dhol played with sticks. In Herat there are three different atan, not three different dances, but rather three variations 1. urban; 2. village; 3. distant suburban or kuchi (nomadic). The Pashtu word atan actually means dance.The other popular afghani dance: SHALANGI, NATSA & ISHALA, CHOP BAZI 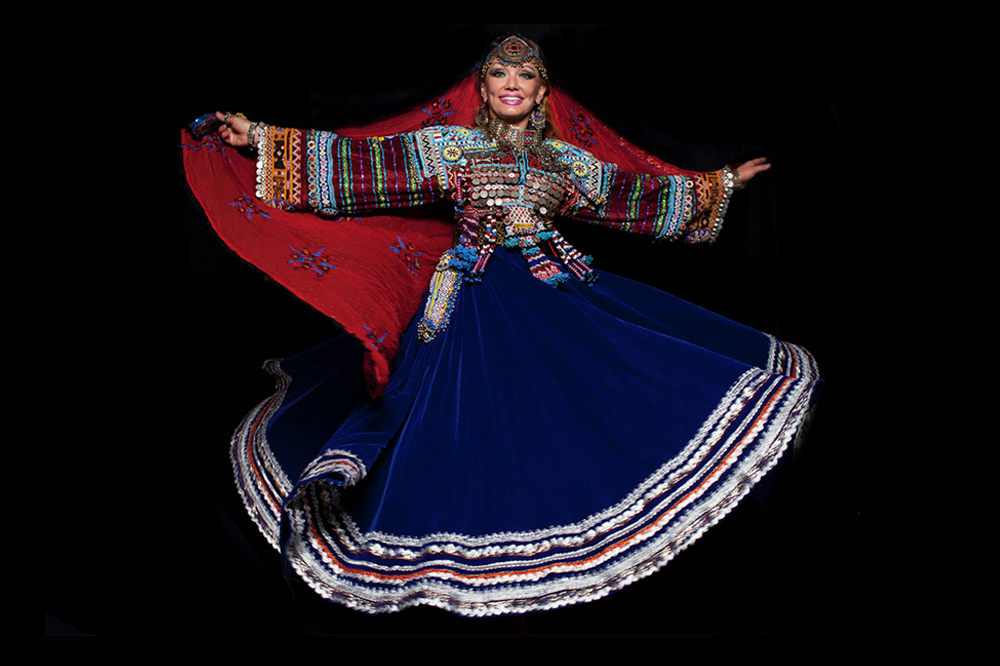 HERATI SOLO – GHAMZEGI or QANDEGI. Herati women’s solo dance known as ghamzagi or qandegi in which all naz or eshwa that a dancer knows is drawn upon to be presented in a free format. Naz is the Persian equivalent of coyness, it is the use of femininity to it’s utmost and is a very important feature of the female psyche in the East. Movements can describe aspects of daily activities such as facial beautification, combing the hair, sewing, sowing, picking fruit or flowers etc. Famous Herati dancer, Sitara, noted that on the video she recorded in Herat in the 1970’s, she represented beautification, combing hair, sewing and other such activities in her dance solo. There is even a variety of women’s solo called chaqubazi or knife play, in which the dancer feigns cutting or stabbing herself sometimes to a degree of credibility that shocks the audience. Herati’s are also familiar with the Oriental tea cup dance in which saucers with cups of water are held in each hand as the dancer does various moves including kneeling and bending backwards until the head touches the floor without spilling the contents of the cups held in the palms. Another interesting mime like dance done in Herat is a kite dance called khaghazbadbazi in which this popular Afghan sport is described in dance. Facial movements include side-glances, gentle yet sharp neckslides, and an occasional subtle sweet innocent smile.