“The truest expression of a people is in its dance and in its music. Bodies never lie.”

The present-day Armenian republic is a small and extremely mountainous area about the size of Belgium.Formerly, Armenia covered a huge territory, including the mountains of what are now Georgia and Azerbaijan, and the vast plateau which extends from eastern Anatolia in Turkey to the southern Caucasus and partly into Iran, Iraq and Syria. This great plateau is home to Mount Ararat, the symbol of the Armenian nation and also a symbol of exile: its breast-shaped profile dominates the view from Yerevan, Armenia’s capital, but the mountain itself is now in Turkish territory.

The women’s solo dance, less dramatic than Persian court dance, relies heavily on upper body movements with weeping arms and slow undulating wrists. Fingers are held in a long C-pattern also called “deerhead pattern”, and are kept still while the arms and wrists are utilized. The head turns from side to side framed by the arms. The back arches as arms are held high and brought lower sweeping in front or behind the torso. The movement basically consists of sedate walks, dipping occasionally or executing quick three-quarter turns repeatedly. The walk is almost a glide similar to the Georgian manner of “floating”, like an illusion of ice skating along the floor In some cases, the dancer chooses to briefly kneel, re-enacting daily tasks such as sweeping, spinning etc. Dancers often join little fingers and dance in lines or circles. Stage groups sometimes use the basket or jars hold familiar to folk dancers, and the more traditional simple hand holds. Ordinarily women do not use props, aside from the basic scarf essential to their apparel, which can be waved about as the dancer sways or walks to the music. Men and women do not often dance together, only in folk village dances.  Men and women do not usually touch one another but only holding hands in some formation. Large ensembles choreograph enchanting patterns with women floating gracefully from one formation to the next gently changing the elegant arm positions and body angles to create a flowing motion. Women retain a dreamy innocent air, never looking fully into the faces of the audience or their partner. A small wisp of a smile may play about the lips while the eyes appear demure and almost expressionless; the dancers, at times, appear to dance in another realm not quite of this earth.

The Anatolian plain is one of the world’s oldest centres of civilization. The Armenians, descendants of a branch of Indo-Europeans, settled after the fifth century B.C.E. and established the first Christian state in 301 C.E. A strong cultural identity was established early on, largely thanks to the invention of the Armenian alphabet in 406 C.E. Other inhabitants included Persians, Byzantines, Arabs, Assyrians and Turks. While this resulted in an extremely rich and varied folklore, there was also constant strife among the various peoples.

Traditional dancing is still popular among expatriate Armenians, and has also been very successfully `exported’ to international folk dance groups and circle dance groups all over the world. 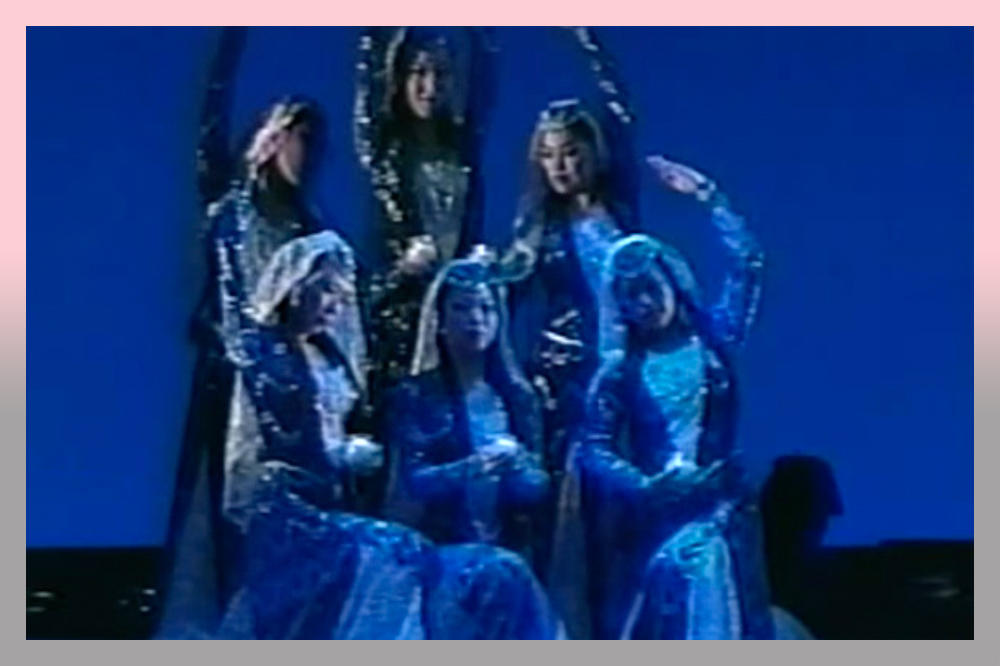 Men’s staged dance, on the other hand retains a passionate vigor displaying the traditional characteristics of virility. In contrast to the female styling, male arm movements are simple yet powerful and masculine. Arms are held high or one hand across the chest and the other held out at shoulder level. While dancing in a line, a variety of holds are used such as shoulder or hand holds. The dance is punctuated by stops in which the right heel hits the floor before the left foot. Men’s dances are often composed of strong, sturdy kicks, leg lifts, jumps, leaps and stamps as well as intricate sharp footwork executed with purposeful vigor. A well-known men’s dance is the Fortress Dance (pert bar) in which the men form a human pyramid standing on each others shoulders.

The theatrical “national costume” is an adaptation of folk dress of the Caucasus and consists of a long “A” line cut dress of light-weight fabric in light, often pastel color with long narrow sleeves. The dancer usually adds a fitted jacket with elbow length belted at the waist. The head wear for this costume includes a pillbox cap or tiara covered with a flowing long often of lacy or sheer fabric. The hair is done in two long braids.